Winners of the 2022 Aga Khan Award for Architecture announced 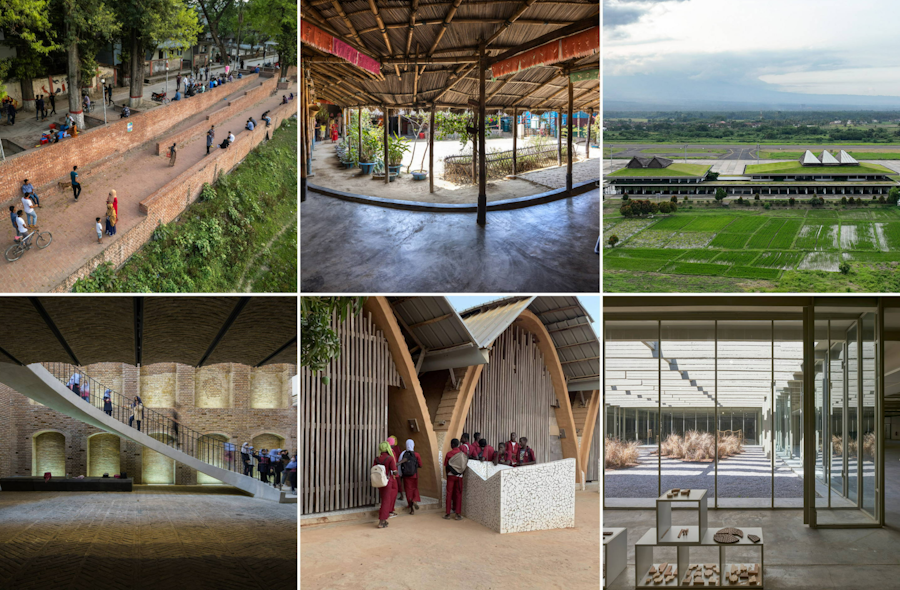 Winners of the Aga Khan Award for Architecture 2020-2022 Cycle

Winning projects show promise for communities, innovation and care for the environment

Geneva, Switzerland, 22 September 2022 – The winners of the 2022 Aga Khan Award for Architecture (AKAA) were announced today. The six Award winners, who will share the $1 million award, one of the largest in architecture, show promise for communities, innovation and care for the environment.

Through consistent community participation and appropriation, extensive involvement of women and marginalised groups, and a local workforce, the seemingly simple undertaking of cleaning up the access to the Nabaganga river in Jhenaidah led to a thoughtful and minimal landscaping project with local materials and construction techniques, thus transforming a derelict informal dump site into an attractive and accessible multifunctional space that is valued by Jhenaidah’s diverse communities. As such, the project managed to reverse the ecological degradation and health hazards of the river and its banks, and induce effective ecological improvement of the river, in one of the most riverine countries on earth. [Extract, Jury Citation]

The six temporary community spaces of the Rohingya Refugee Response programme provide a dignified, sensitive and ingenious response to emergency needs related to the major influx of Rohingya refugees into Bangladeshi host communities, with particular attention to the safety of women and girls. The concept and design of the six spaces are the result of appropriate planning, solid partnerships and inclusive processes involving the diverse refugee and host communities, such as defining spatial and functional needs. [Extract, Jury Citation]

Arising from a sea of a paddy fields, the building extends the language of the landscape into a concentrated event that coalesces architecture, functionality and setting in a seamless yet discernible disposition. Modern and efficient in all aspects, but at home in its place, Banyuwangi International Airport may be a game-changer in airport architecture, especially considering that the Indonesian government is set to build some 300 airports in the near future. [Extract, Jury Citation]

In the dense urban neighbourhood that is Tehran’s historical centre, this untypical reuse and conservation project has transformed the Argo Factory – a former brewery whose activities were moved 10 years before the Iranian Revolution, for pollution reasons, to a site outside the city – into a private museum for contemporary art. From the ruins of the original building, the existing brewery was renovated and new surfaces built with a subtle approach and design. A variety of spaces for exhibitions, talks and films were developed over four levels, and a new artist residence was built adjacent to the museum. [Extract, Jury Citation]

The renovation of the Niemeyer Guest House is an inspiring tale of architecture’s capacity for repair, at a time of dizzying, entangled crisis around the world, and in Lebanon in particular, as the country faces unprecedented political, socio-economic and environmental collapse. Located on the outskirts of Tripoli – one of the oldest and most beautiful port cities, once renowned for its craft but today ravaged by extreme poverty, migration and lack of public space – the rehabilitation of the Guest House is part of the Rachid Karami International Fair (RKIF), the unfinished masterpiece of the architect Oscar Niemeyer. [Extract, Jury Citation]

A campus replete with infrastructure, buildings, landscapes and furnishings, the Kamanar Secondary School is unique in that it addresses the multiple scales of urbanism, landscape, architecture and building technologies with equal commitment and virtuosity. The site’s topography and flora are the key founding conditions of this project, prompting the introduction of a grid of classroom pods organised around pre-existing tree canopies, adopting their shade as social spaces that serve the students and teachers alike. [Extract, Jury Citation]

The Aga Khan Award for Architecture was established in 1977 by His Highness the Aga Khan, 49th hereditary Imam of the Ismaili Muslims, to identify and encourage building concepts that successfully address the needs and aspirations of communities in which Muslims have a significant presence. The Award’s selection process emphasises architecture that not only provides for people’s physical, social and economic needs, but that also stimulates and responds to their cultural aspirations.

This year marks AKAA’s 45th anniversary. In a meeting in February 2022, an independent Master Jury shortlisted 20 projects from a pool of 463 projects nominated for the 15th Award Cycle (2020-2022). Subsequently, after on-site reviews of the shortlist by a team of experts, the jury awarded six projects amongst them.

The venue for the Award ceremony

Ceremonies to honour the winning projects and mark the close of each triennial cycle are held in settings selected for their architectural and cultural importance to the muslim world. In 2022, the ceremony will be held in Muscat, Sultanate of Oman, in conjunction with the Aga Khan Music Awards ceremony.

Previous venues encompass many of the most illustrious architectural achievements in the Muslim world, including Shalimar Gardens in Lahore (1980), Topkapi Palace in Istanbul (1983), the Alhambra in Granada (1998) and Emperor Humayun’s Tomb in Delhi (2004).

For a full online press kit, which includes briefs on each of the winning projects, high-resolution images and other information, please see: https://the.akdn/2022AwardWinners

The nine members of the independent Master Jury who selected the 20 shortlisted projects are: Nada Al Hassan, an architect specialising in the conservation of architectural and urban heritage; Amale Andraos, Professor at the Columbia University Graduate School of Architecture, Planning and Preservation; Kader Attia, an artist who explores the wide-ranging effects of western cultural hegemony and colonialism; Kazi Khaleed Ashraf, director-general of Bengal Institute for Architecture, Landscapes and Settlements, in Dhaka, Bangladesh; Sibel Bozdoğan, a Visiting Professor of Modern Architecture and Urbanism at the Department of the History of Art and Architecture, Boston University; Lina Ghotmeh, a French-Lebanese architect who leads a practice where every project learns from a vernacular past to build a new “déjà-là”; Francis Kéré, an AKAA laureate and internationally renowned Burkinabè architect who received the Award in 2004 for his first project, an elementary school in Gando, Burkina Faso; Anne Lacaton, founder of Lacaton & Vassal in Bordeaux in 1989, who focuses on the generosity of space and economy of means; Nader Tehrani, founding principal of NADAAA, a practice dedicated to design innovation, collaboration and a dialogue with the construction industry.

A monograph that includes essays on issues raised by the Master Jury’s selections of the shortlist and the winners for the 2022 Award will be published by Architangle in October 2022. Printed on paper that is FSC® and Blue Angel certified, 100% recycled and climate neutral, Inclusive Architecture, edited by Sarah M. Whiting, presents descriptions and illustrations of the 20 shortlisted projects, including the six Award recipients, with contributions by Kazi Khaleed Ashraf, Sibel Bozdoğan, Souleymane Bachir Diagne, Farrokh Derakhshani, Nasser Rabbat, Nader Teherani and Sarah M. Whiting.

The Aga Khan Award for Architecture recognises examples of architectural excellence in the fields of contemporary design, social housing, community improvement and development, historic preservation, reuse and area conservation, as well as landscape design and improvement of the environment.

Particular attention is given to building schemes that use local resources and appropriate technology in innovative ways and to projects likely to inspire similar efforts elsewhere. It should be noted that the Award not only rewards architects, but also identifies municipalities, builders, clients, master artisans and engineers who have played important roles in the project. In the past 15 triennial cycles of the Award, 128 projects have been awarded and nearly 10,000 building projects have been documented.

To be eligible for consideration in the 2022 Award cycle, projects had to be completed between 1 January 2015 and 31 December 2020, and should have been in use for at least one year. Projects commissioned by His Highness the Aga Khan or any of the institutions of the Aga Khan Development Network (AKDN) are ineligible for the Award.

The Aga Khan Award for Architecture is part of the Aga Khan Development Network (AKDN). Founded and guided by His Highness the Aga Khan, the AKDN works in 30 countries to improve the quality of life and to create opportunity for people of all faiths and origins. Its agencies operate over 1,000 programmes and institutions – some more than a century old. The Network’s approach to development spans a range of cultural, social, economic and environmental endeavours. The mandates of its agencies include education and health, agriculture and food security, micro-finance, human habitat, crisis response and disaster reduction, protection of the environment, art, music, architecture, urban planning and conservation, and cultural heritage and preservation. AKDN employs approximately 96,000 people, the overwhelming majority of whom are based in developing countries. AKDN’s annual expenditures for non-profit development activities is approximately $1 billion.